Come and taste these unique foods that are only available here. Have you ever tasted Lebanon Bologna or Opera Fudge? If not, you don’t know what you’re missing! 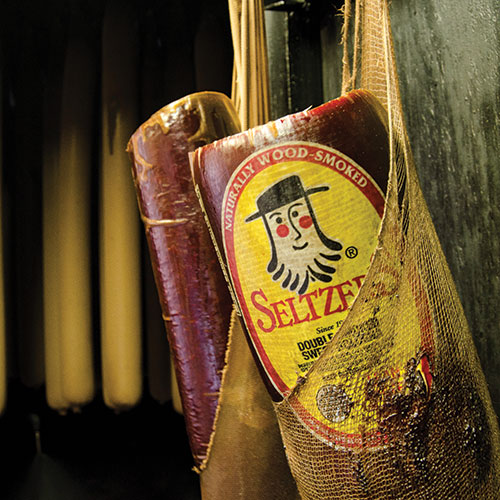 Lebanon Bologna has been well-known for years and was a popular and in demand staple. Robert L. Eby, expanded his bologna manufacturing in 1905, by erecting four new smokehouses at his place of business. In 1908, George J. Seeger, bologna manufacturer of Avon, Pennsylvania produced fifteen tons of bologna in a week. One local newspaper headline of 1909 stated Famed Bologna: Made in Lebanon, Home Product That is Getting A Reputation Over the World. The makers of bologna also were well known. The Lebanon Courier and Semi-Weekly Report August 6, 1909 issue had the following story of a bologna record:

According to a 1909 news article in the Lebanon Courier and Semi-Weekly Report, George T. Brooks was one of the oldest active bologna makers. His company was also “enjoying the greatest prosperity in the history of the business here.” Brooks was erecting nine new smokehouses in 1909, doubling the number on his Tenth street property.

In 1901, Daniel Weaver was the largest manufacturer of Lebanon bologna according to an article in the October 9, 1901 issue of the Lebanon Courier and Semi-Weekly Report:

Large Manufacturer
Daniel Weaver, the largest manufacturer of Lebanon bolognas, which are a standard in the market, has recently purchased the factories and stock of Shaffer and Siegrist and Steiner and Co., of this city, and transferred them to his large plant at Avondale Nursery, north of the city. A few weeks ago he bought out a large Lancaster plant and also removed it to his central plant. This gives him a capacity of one car load, or about fifteen tons, a day, and this is hardly sufficient to supply the demand.

Harvey Seltzer began production of his family bologna recipe in 1902 in Palmyra, Pennsylvania and his company still operates today as Seltzer’s Smokehouse Meats. Seltzer’s is the world’s largest producer of Lebanon Bologna and distributes worldwide. Of the many popular and prosperous manufacturers of Lebanon bologna, only Seltzer’s and Godshall’s remain in production today. You can no longer tour any of the bologna manufacturing plants. The products are available in local grocery stores. The best place to pick up Seltzer’s products is at Black Swan Antiquities in Palmyra. Make sure you stop by the Visit Lebanon Valley office, 31 S 8th street, Lebanon and pick up the Shopping and Antiquing Itinerary, included on this trail is this shop and many others.

Another favorite treat, not made anywhere but Lebanon County, is the mysteriously named opera fudge. The best time of year to get this treat is between Thanksgiving and Valentine’s Day. This sweet treat is a rich, creamy fondant coated in chocolate that tastes like no other candy.

The origin of the name opera fudge is unknown but there are local stories. One story is that German immigrants took chocolate-covered creams to operas at the Fisher Opera House (established when Fisher Hall was enlarged in 1891), which was located across the street from Wertz Candies, 718 Cumberland Street, Lebanon, and the candy became known as opera fudge. Opera fudge has been around for generations, made from family recipes, such as the Van Winkle family and Ethel Lippert recipe. The earliest mention of opera fudge I found was in 1912. In the Lebanon Daily News, May 12, 1918, a Lebanon County soldier wrote home from France that he longed for “some of Dr. Charles Boger’s Opera Fudge.”

Wertz Candies have been making opera fudge since the store received their license in 1931. The shop owners were opening a franchise for a caramel corn shop but customers started asking them for opera fudge and bringing in homemade samples. Nora Wertz eventually created her own recipe which is still used today. Opera fudge is not like other fudge. The inside fondant is rich, creamy, and very sweet. This is coated with chocolate. Wertz makes their opera fudge in two flavors vanilla and peanut butter. The shop also has wonderful caramel corn.

After you have sampled these treats, head outdoors for some exercise and fresh air. The Lebanon Valley has many great outdoor areas to enjoy. Explore fifteen miles of old railroad tracks on the Lebanon Valley Rails to Trails. If it has snowed recently, cross-country ski the trail. At the right time of the winter, you could see thousands and thousands of snow geese at Middle Creek Wildlife Management Area.

Color Your World at The Crayola Experience