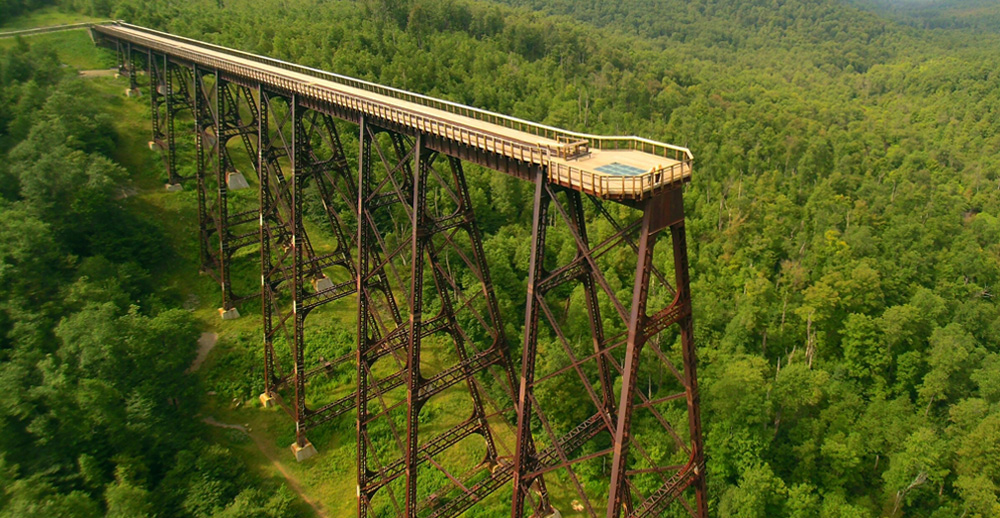 Hidden…. deep within the forest of northwestern Pennsylvania…an engineering masterpiece, the Kinzua Viaduct, once soared 301 feet high and 2,053 feet across, the highest and longest railroad viaduct in the world.

A Bridge Unlike Any the World Had Seen

In 1882, General Thomas Kane, a Philadelphia lawyer, decorated American Civil War Veteran, and president of the New York, Lake Erie and Western Railroad and Coal Company, had rich coal deposits south of the Kinzua Gorge. But since his customers were to the north, Kane needed to cross the valley. Kane needed a bridge.

Paris-born Octave Chanute, chief engineer for the Erie-Railroad, rose to the challenge. The man who would later help the Wright brothers fly had a bold solution-a bridge unlike any the world had seen.

The bridge was pre-fabricated in Phoenixville, near Philadelphia, and transported to the site for erection. Once the sandstone foundation piers were in place, 125 men, working 10-hour days, completed the construction in just 94 days.

Standing 301 feet tall (24 feet higher than the Brooklyn Bridge) the Viaduct quickly became a tourist destination. Walking out on the bridge was the next best thing to flying.

But by 1900, the locomotives and railroad cars hauling coal and timber across the Viaduct became larger and heavier. A h3er steel bridge was required. Using 6.7 million pounds of steel, workers erected a new bridge to replace the original.

Not only was the Kinzua Viaduct successful in transporting Kane’s coal across the valley, it instantly became a popular tourist attraction bringing sightseers from around the globe to visit.Since 1963, the bridge has served as the centerpiece of the Kinzua Bridge State Park. The Kinzua Viaduct was placed on the National Register of Historic Places in 1977, and the National Register of Historic Civil Engineering Landmarks in 1982.

The Kinzua Viaduct spanned the Kinzua Gorge for more than a century before it partially collapsed under the powerful winds of a tornado in 2003.

Bridge designer C.R. Grimm predicted his creation would last 100 years. And he was right. Grimm’s design used roller expansion bearings where the tower legs were anchored to the masonry foundation piers. This design allowed lateral expansion in the tower legs under temperature loading. But his failure to replace the original 1882 anchor bolts would have catastrophic consequences.

In July 2003, engineers and skilled bridge builders were hard at work on a $12 million repair project to reinforce the aging structure. The workers decided to call it a day when the sky went black and the winds rushed in. A tornado tore through the forest heading straight for the Viaduct. Hundreds of trees were ripped from their roots and 11 of the bridge’s 20 towers were lifted, twisted and thrown onto the valley floor. Six towers remained standing on the south end; only three towers remained upright on the north end.

Engineers later confirmed that winds attacked in three directions. The original 1882 anchor bolts and collar coupling assemblies, which mated the old bolts to the later 1900 construction, had failed.

Within 30 seconds, nature had brought the mighty span to its knees.

The remaining six towers of the original Kinzua Viaduct were stabilized and reinvented as the Kinzua Sky Walk. Towering over the Kinzua Gorge at a height of 225 feet, and 624 feet long, the new skywalk has a partial glass floor overlook at the end of the pedestrian walkway which features the historic railroad tracks. Views are breathtaking.

Opened to the public in September 2011, the Kinzua Sky Walk pays tribute to the past while emerging once again as an amazing engineering marvel.

One of the World’s Top 10 Most Scenic Skywalks

The Kinzua Sky Walk was recognized in 2016 by The Culture Trip, U.K.as “One of the top 10 most scenic skywalks in the world.”

Located at the Kinzua Bridge State Park in Mt. Jewett, Pennsylvania, the Kinzua Sky Walk is open to the public year round. Admission to the park and the Kinzua Sky Walk is free. The park includes tree-shaded picnic areas, areas for biking and birding, and a park pavilion which can be rented. In addition, there are two trails, the easy 1-mile General Kane trail, and a second more challenging trail, the KinzuaCreek Trail which leads to the bottom of the gorge where the fallen towers of the original viaduct still remain.

The park is open from 8 am to dusk. Driving address for the park is 296 Viaduct Road, Mt. Jewett, PA. For additional information on the Kinzua Sky Walk, including historic photos and video, go to visitANF.com. 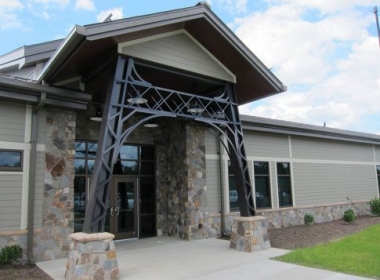 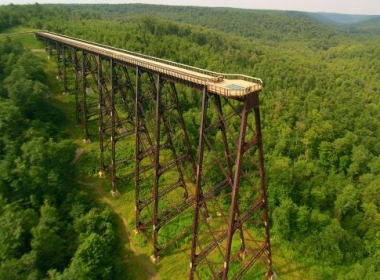 Color Your World at The Crayola Experience