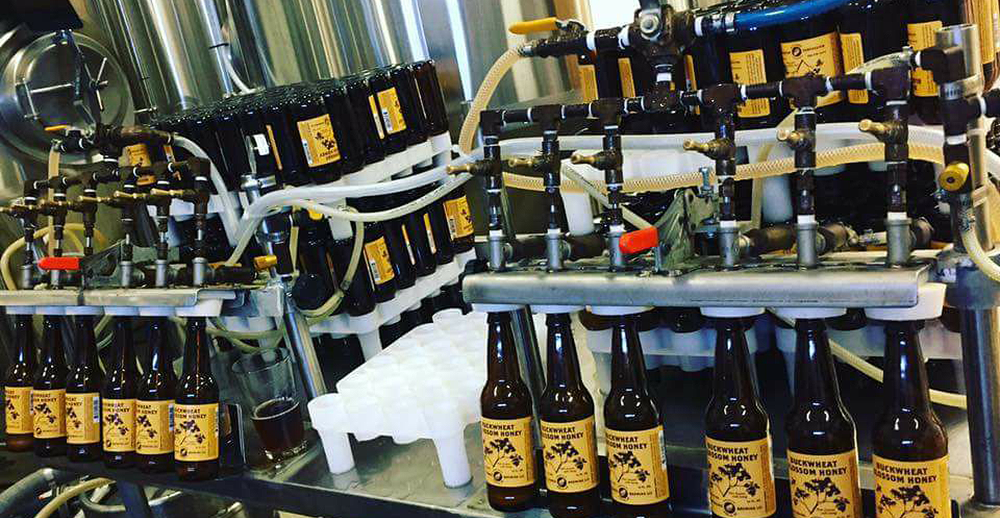 There’s only one microbrewery in Somerset County, Pennsylvania. Founded in 2012, Whitehorse Brewing is a family owned, 10-barrel microbrewery located in the historic community of Berlin, set in the beautiful Laurel Highlands. Our Berlin taproom overlooks the entire brew house. Therefore, when you’re having a tasty beverage we get the chance to educate you on the brewing process up-close.

We take great care when making our quality crafted beer. We use as many local ingredients as possible and we are a natural, fully sustainable brewery. Our bestselling Honey Lager uses 45 pounds of locally sourced honey. We even use fresh, local hops, when available. Our spent grains are given to a nearby farm to feed livestock.

In the Springtime, we open our outdoor canopy, which features a wildflower garden that surrounds the seating area. This also allows visitors to view the spectacular Whitehorse Mountain scenery. Food trucks are scheduled every Saturday beginning in May. Since we are pet friendly, bring your four-legged friend and enjoy the sights together.

In March of 2018, we opened a taproom in Washington, Pennsylvania. Located along Racetrack Road, the taproom features a rustic, industrial look with reclaimed barnwood, hand-crafted inverted wooden water buckets for light shades all with the detailed craftsmanship from Tall Pines Distillery owner in Salisbury, PA.

Here, we offer twelve taps, with an occasional “guest” tap. We also carry local wines and distilled spirits. We don’t serve food at the taproom, but we do have a working relationship with the almost famous Primanti Brothers location. You can have their food delivered right to your table. Or if you prefer, you can even bring your own food with you.

Behind the scenes, we recently added some serious talent. As with a lot of other brewers, Mike Fahy got his start homebrewing beer kits in his garage with a group of his friends in early 2014. It didn’t take long before they were designing their own recipes, starting with extract and then transitioning into all grain.

One day, while brewing, “Bad Moon Rising” by Creedence Clearwater Revival was on the radio. They had an idea. Bad Moon Brewing was born. Mike and the guys soon took this hobby and turned it into an obsession.

A big turning point came when Mike saw a raspberry jalapeno jam and decided to create a beer based on it. People were hesitant at first, but their reaction when they tried it and loved it ignited a fire for the Bad Moon Brewing crew. The experimental brewing has created everything from big, boozy bourbon stout to fun flavors like Kool-Aid sours and Oreo stouts. 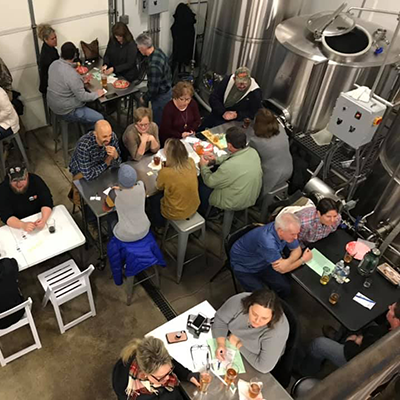 Success at home-brewing competitions gave Bad Moon some recognition and a desire to grow. As luck would have it, Whitehorse Brewing’s owner, George, had met Mike through mutual friends. The two quickly formed a friendship. Soon, the guys from Bad Moon were helping at Whitehorse. They’ve begun to craft new beers as well as revamp some of the current Whitehorse recipes. While Whitehorse favorites will continue to remain staples at the brewery, this addition brings bold new flavors as well as some of their much-loved homebrew recipes. It has been a dream come true for a homebrewer turned head brewer, but the best part has been becoming a part of a local business and finally being able to share Bad Moon’s creations with the community.

Learn more about our craft beer selection at WHBrewing.com

Be Nice to the Hotel Staff