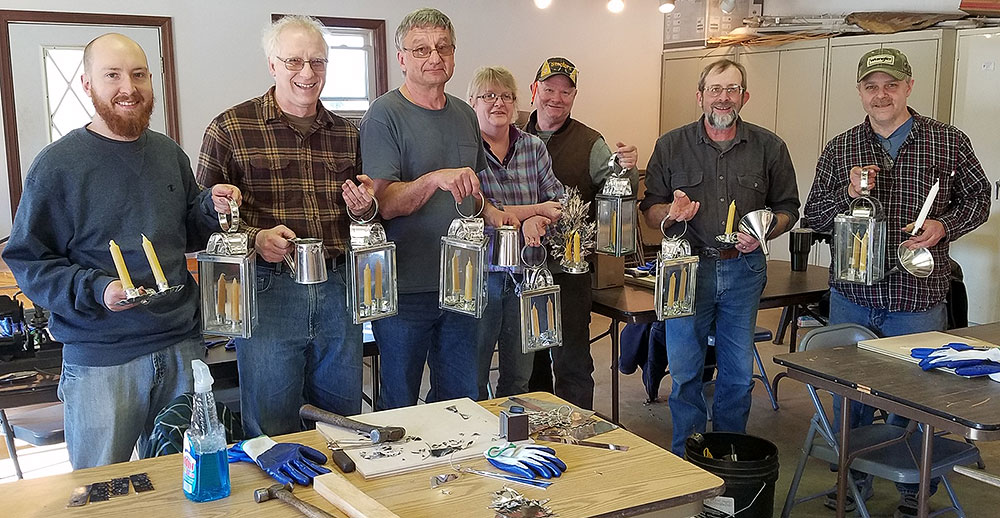 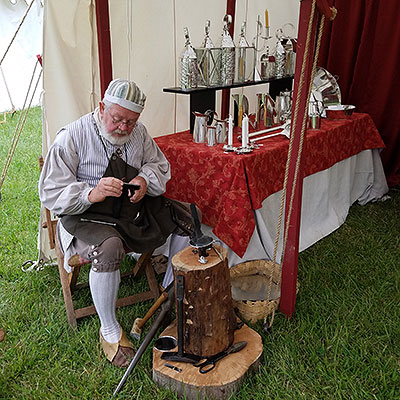 Roy Phillips has always been interested in history. For example, most of his hunting was done with a smoke stick (black powder), he very much enjoyed the challenge of the sport and the history behind it. But until he retired from teaching Computer Science, he didn’t know how much he was interested.

He went to the Somerset County Historical Center to volunteer. There he found Mark Ware who at the time was the Educational director. Mark had him help with Coopering. Fred Will was their Master Cooper. He taught Roy how to make Keelers and other buckets. Over time, Roy helped with more coopering and some blacksmithing. Roy became proficient at the art of blacksmithing, but they also had a couple talented blacksmiths. Roy went back to Mark. He asked Mark, “What don’t we have that would be helpful?” Mark responded, “We don’t have a tinsmith.” To this, Roy said “What does a tinsmith do?” And at that, Roy’s next career began.

Mark got Roy a grant to study under a Master Tinsmith in Ottawa, Canada. In the summer of 2005, Roy packed up his gear and heading north to meet Greg Pietersma. Greg is a terrifically talented artisan, extremely gifted in the art of tinsmithing and he spent the entire summer training Roy while using tools from the 1700 and 1800s. His final project was a French coffee pot. When he finished, Greg told him that he had been the first student to finish the project. With a great sense of pride and accomplishment, Roy excitedly travelled home. He was eager to share his new-found talent and knowledge to others.

Returning home brought a new challenge for Roy. He had no tools that he needed. As luck would have it, a former teacher friend was a collector. He tracked down George Bowser in Ursina, Pennsylvania and told him that he was going to use the tooling in Somerset County. George was hesitant to let go of the tools, but when he heard that they were going to be used, he changed his mind and gladly passed the tools along. 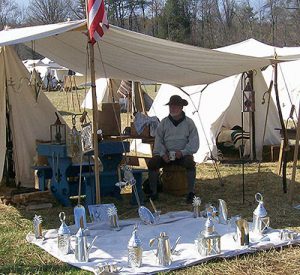 From that point on, Roy would demonstrate at the Somerset Historical Center Craft Days each year on the weekend after Labor Day. He travels all over the state and neighboring states, sharing his craft, his passion for history, and beautiful wares. He especially loves showing his crafts to kids. Their faces light up when they see these historical methods crafting something out of basically nothing with old tools.

Roy, along with his wife Sharon, love to travel and show off the tinsmithing craft. After Sharon retired, she began to take up the tinsmith trade as well. According to Roy, she has been getting very good and has been coming up with some terrific designs. Together, they have been getting invites to different historical events far and wide. If you venture to one of these events, you will find them living in a canvas Marquee tent. Even though the weather isn’t always the greatest, Roy says that it’s all part of the history. What truly matters is getting to meet some terrific artisans from all over the country. And working to keep these early American trades alive.

If you cannot find Roy and Sharon at an event, you can find them at home at the Somerset County Historical Center. Last year he finally put enough tin tools together to teach a tinsmithing class there. Roy and Sharon were very please with the class and he believes all students were as well. The next two years are completely booked up. He only will take on eight students each year. He says it’s a lot of fun for all and the students. Especially since they get to go home with some really historical and useful wares.

Roy and Sharon really enjoy sharing their enthusiasm for the trade to others, especially the young. Over the years he feels very privileged to have been able to replicate items for different historical sites. He wants to keep up this work as long as he can. As Roy says, “I’m only 75 so, God willing, and the creek don’t rise I’ll keep going.”

Tin Man Roy and his wife Sharon can be found at different historical events and venues throughout our area, including Fort Roberdeau, Bushy Run Battlefield, Fort Henry, and Fort Niagara. You can also find them on Facebook at TinManRoy. Or contact Roy directly at tinmanroy1@gmail.com.