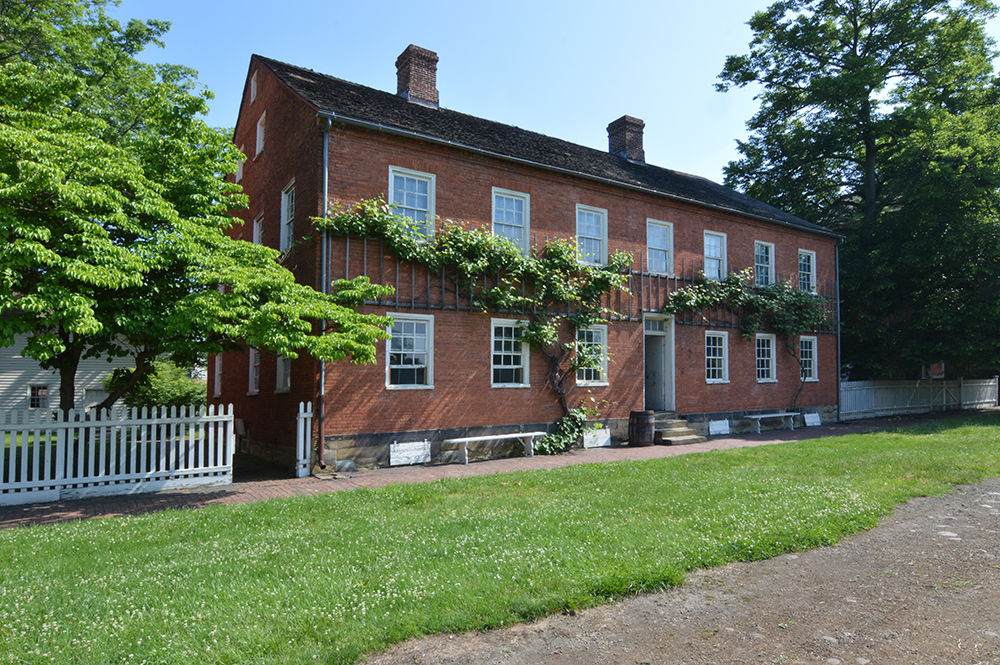 Farming the rich soil along the Ohio River in western Pennsylvania right next to humming cotton mills… Not your typical settlement on the American frontier. The village of Economy, founded in 1825 by German Lutheran separatist George Rapp, was home to the Harmonist Society. The Harmonists were one of the most successful religious communal groups of the era, building booming industries that not only sustained their society, but fueled the area’s growth as a manufacturing mecca. What remains of their heritage is now a National Historic Landmark and State Historic Site, Old Economy Village in Ambridge, PA.

The Harmonists’ religious devotion and economic prosperity were ingrained in their simple lifestyle, working together for the good of the community. True to the communal spirit, those who joined the Society gave over all their possessions and in turn, received everything they needed to live comfortably.

As you walk through this historic village, it’s apparent that Economy was built for productivity. The leader’s home (George Rapp House) was the heart of the village, with the community stores and gathering places close by. The members’ homes circled the center of town; 80 of these still stand today. Families inhabit some, another is a bed & breakfast, some house small businesses.

Around the outskirts were the barns, mills, blacksmith shop and similar businesses operated by the men. Beyond that, a couple thousand acres of fields, where the Society’s female members diligently worked every day for the good of the Society. Interestingly, the main thoroughfare (14th Street today) gave direct access to the Ohio River for shipping the Society’s excess crops and goods manufactured.

The site that’s open to the public features seventeen restored historic structures and George Rapp’s garden, all built between 1824 and 1830, which was the center of “Oekonomie.” Your journey starts at the Visitor Center, where you’ll see a short video about the history of the Society and the village. There’s also a small museum displaying artifacts from the Society.

I was fortunate to get a personal tour from the site manager, Michael Knecht, who told me stories you won’t find on their website or in brochures. (And yes, some of them are told here.)

We started at the George Rapp House, which was quite elegant compared to the other members’ homes. A room-sized religious painting fills one wall of the parlor, where I also saw an obligatory harp. Rapp entertained and met with many important political and business leaders in his home, including German royals and President Zachary Taylor. They all came to learn about how the Harmonists built and maintained their successful community.

The heavy frame of the four-poster bed dominates the master bedroom, which also features what’s most likely the first walk-in closet ever! (Secret about that closet … there’s a door that leads underground to a vault, where the wealth of the Society was stored until a separate addition was built for that purpose. Can’t go down there, though.)

Outside, George Rapp’s gardens take up a lot of real estate. In a hub-and-spoke design, arbors, lawns and flower beds all converge on a central pavilion. There’s also an unusual Grotto featuring a thatch roof and a neo-classical interior (think Greek columns). To the Harmonists, the Grotto was a metaphor for their Society – rough outside, refined inside. Today, the gardens host weddings and special events.

The Feast Hall was just that … a place for communal meals and musical performances. The enormity of the second-floor hall is impressive, but then there’s this oddity: Doors placed high on the walls at each end of the room, with no apparent access. It’s speculated that George Rapp addressed the gatherings from these vantage points, and that the doorways also provided ventilation for the large hall.

The first floor features recreated exhibits from the Harmonist’s Natural History Museum, the first of its kind in the United States. Dozens of species of birds and creatures are on display, including many the Society acquired from faraway places. Society members could visit for free, but non-members had to pay ten cents. The first floor also housed classrooms including one for musical instruction.

The General Store carried all the goods that any Harmonist could get for free, and others could buy. In addition to the food and goods they produced themselves, there were supplies from around the country and the world such as tea, sugar and glassware. And wine. Lots of wine, produced by the Harmonists in their own Wine Cellar. Massive oak barrels held thousands of gallons of wine at any given time. The casks are still in the cavernous cellar, giving testimony to the Society’s forward-thinking knowledge of mass production.

Down the street, the Baker House gives visitors a look at a typical Society’s member’s living space. Small but functional, this was home to storekeeper R. L. Baker, his mother and sister. The Baker House Garden and Family Shed are right outside. Even though food was provided by the Society, every family had their own small garden along with a shed to store wood, tools and supplies. Chickens and a cow lived there, too.

Many other buildings make up Old Economy Village…a cabinet shop, carriage house, blacksmith shop, and granary, to name a few. Most of Old Economy’s buildings are open only with a tour guide, so you need to stop at the Visitor Center first to get checked in. Volunteers in period attire escort you through the Village buildings and grounds, taking you back to the Harmonist way of life.

George Rapp was a pacifist religious reformer in Germany. Believing that the German Lutheran church had become corrupt, he founded his Harmonist Society in 1785 based on his teachings and early Christian principles. He and his 800 followers came to the United States in 1803 and founded their first community – Harmony, PA (20 miles north of current-day Ambridge). Before building their third home in 1825 Economy, the Society moved west to Indiana and established another community there (New Harmony, IN) in 1814.

Agriculturalists and industrialists working alongside each other was very well-regarded during this era. Thomas Jefferson and other notable leaders believed this was the path that would make America thrive independently. The Harmonists created new manufacturing methods and perfected existing ones, making them extremely competitive in textile manufacturing—wool, cotton, and silk—and agricultural production.

They constructed textile factories powered and heated by steam engines. They built shops for all types of artisans including blacksmiths, hatters, wagon makers, cabinetmakers, and potters. In perfect communal form, they built a centralized steam laundry, bake oven and dairy for the community. Later, they perfected the technology of silk manufacturing, earning the Society worldwide acclaim.

Since they practiced celibacy to purify themselves for the Messiah’s second coming (which they expected to happen pretty quickly), the Harmonists didn’t marry. As the Society’s numbers shrank, they began hiring non-members to work their fields and businesses. This was necessary to keep up with the far-reaching demand that they’d created for their unique and innovative products. Paid workers filled this demand in Harmonist textile and grain mills, fields, livestock barns, and in the many shops and service businesses.

Eventually, the mills stopped operating because there simply weren’t enough workers. At that point, the Harmonists began investing in oil and the railroads. This financed the development of the city of Beaver Falls, several miles away on the Beaver River. The Society felt an obligation to residents in the region who relied on them for employment, investing in several factories in Beaver Falls for that purpose. Harmonist investments also helped re-establish Geneva College in this city.

The Harmonists had a lot of accumulated wealth due to their business ventures and investments. By 1900, only six members remained in the Society, and it was dissolved in 1905. That’s when the majority of their land was sold to the American Bridge Company (thus the city’s name – Ambridge). The Society’s trustees willed its fortunes and remaining assets to the Commonwealth of Pennsylvania, in case the last member’s death preceded the Messiah’s second coming.