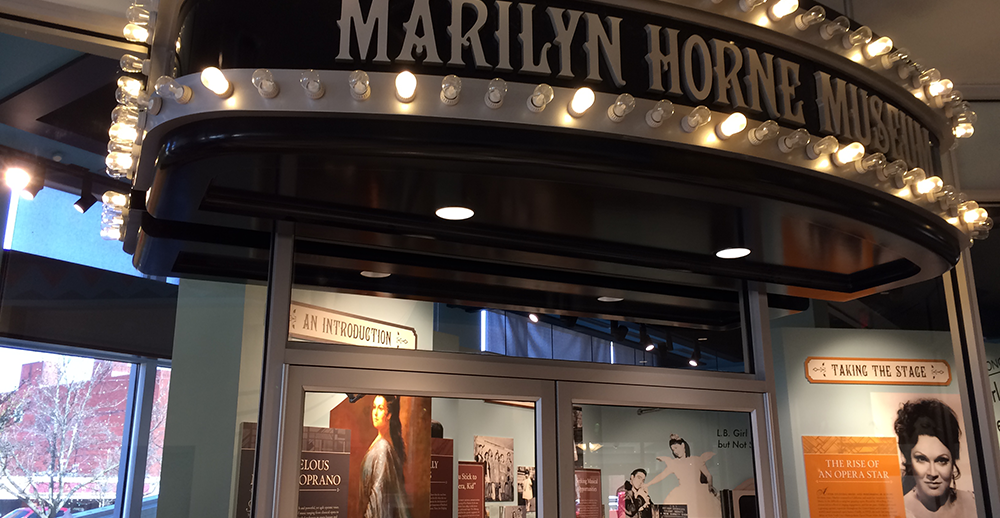 Nestled at the edge of the Allegheny National Forest, in the City of Bradford, is a new museum honoring Marilyn Horne, a small-town girl who became an internationally acclaimed opera star.

Born to Bentz Horne and Berniece Hokanson Horne, both natives of Bradford, this legendary star once performed in concerts staged in Bradford’s town square. From this humble beginning she became a main stay of the Metropolitan Opera and appeared in virtually every major opera company in the world.

The Marilyn Horne Museum and Exhibit Center, a 3,400 square foot, Art Deco exhibition space is located directly alongside Bradford’s town square where she once performed as a child. It is the only museum in the world, of this size and quality, dedicated to a single opera star. Displays include audio guides, film, and 19 interactive exhibits, plus opera costumes and recital gowns. 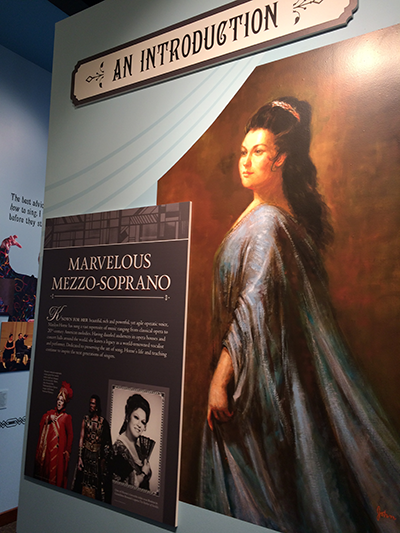 Marilyn Horne has been called “probably the greatest singer in the world,” Opera News 1981. She specialized in roles requiring beauty of tone, and the ability to execute difficult coloratura passages.

A mainstay of the Metropolitan Opera, Marilyn made her debut on stage at the Metropolitan Opera on March 3, 1970. At the age of 20, she appeared in the role of Hata in Smetana’s The Bartered Bride for the Los Angeles Guild Opera. In 1954, she sang the voice of Carmen Jones in Oscar Hammerstein’s re-creation of Georges Bizet’s Carmen. She sang professionally in the world’s great opera houses for over 40 years. Horne is one of the greatest mezzo-sopranos in opera history and is considered the best Rossini interpreter ever.

Horne also sang both contemporary music and traditional popular songs. She sang Love, Look Away for the soundtrack of the 1961 film Flower Drum Song, and she sang the role of Lady Thiang on the Philips recording of The King and I starring Julie Andrews and Ben Kingsley. Horne appeared on the Tonight Show with Johnny Carson and she sang Sing After Me and C is for Cookie on Sesame Street.

Marilyn was a recipient of the National Medal of Arts in 1992 and Kennedy Center Honors in 1995. During her career she won four Grammy Awards. Horne’s contributions to the opera world are many, including The Marilyn Horne Foundation, created in support of young singers.

The Marilyn Horne Museum is someplace special. When you walk into the museum there will be music playing and a student ambassador will greet you and welcome you to the museum. The museum is an immersive musical and educational experience for all ages, it is not a stuffy, do not touch museum. It is a sensory experience, visually striking with exhibits which encourage touching and listening. 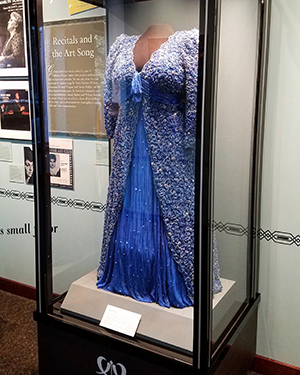 The floors are black and white marble, the entrance to the museum is a striking theater marque. Exhibitions of replica costumes from a few of Marilyn Horne’s signature performances are displayed along the hallway to the theater. Each of the intricate costumes has a rich history.

The baroque style theater is a replica of one of her favorite opera houses. Once seated, visitors are treated to a film in which Marilyn Horne herself narrates the story of her rise to international acclaim. Leaving the theater, wander at your own pace exploring, listening, and interacting with the many displays.

For example, the “Design Your Own Opera Exhibit” allows you to pick your characters and design your backdrop. The opera is then performed with music, after which you can capture the image of the opera and e-mail it to friends and family.

Speaking with Matthew Hileman, Director/Curator of the museum, you catch his excitement and enthusiasm for the museum’s mission. “I’m fortunate to have worked for international entertainment companies, including most recently the Walt Disney Company. It’s my goal to bring a little world-class hospitality magic to our region.”

“I think of this museum as a musical jewel box, a musical centerpiece,” explains Hileman as he describes the work already accomplished and plans for the museum. Along with his experience at Walt Disney Company, Hileman is the former Director of Marketing for the Bellagio Gallery of Fine Arts, Las Vegas, and has a history of working with museums and collections from around the world. His ideas include creating memorable events, behind the scene tours for groups, and a concert series. He is well on his way to making his magical ideas materialize.

The mission of the museum is to further interest in the art of opera and to inspire and educate new generations on the importance of art, culture and philanthropy through the life and achievements of renowned mezzo-soprano, Marilyn Horne. The University of Pittsburgh at Bradford operates the museum. Housed in the six-story Art Deco building owned by the University, the museum is host to a series of candlelight concerts, special events, exhibition spaces, a café, and an amazingly diverse museum gift shop. 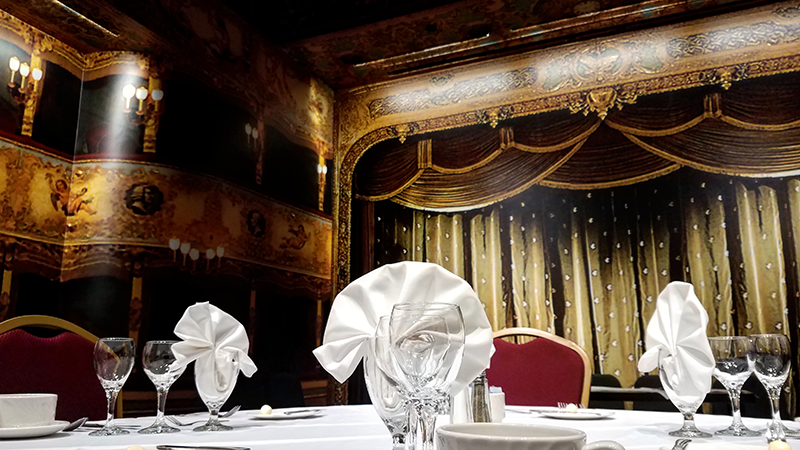 This gift shop is receiving a lot of attention with much thought being given to the items featured. During my visit, I spied a lovely line of French toys, quilled cards made in Vietnam-part of the Fair-Trade Company, greeting cards printed on an old-fashioned letter press, beautiful Christmas tree ornaments, crib mobiles, and a variety of educational toys. Purchasing one of the gorgeous sparkling ornaments, my idea is to hang it on the tree this year, and after Christmas I’m going to have it made into a pin to wear on my winter jacket.

Personally, I like to shop museum stores, I find unique gift items for family and friends, plus I feel like I’m helping a worthy cause. Plans are for the museum gift shop to offer on-line ordering in the future.

The Candlelight Concert Series is a fascinating feature of the museum. Hileman is bringing his passion to the museum’s mission by featuring young artists in a free concert series. Between six and seven concerts are held yearly. Focusing on young artists, Hileman works with a variety of institutions including the Eastman School of Music at the University of Rochester, one of the finest music schools in the world. 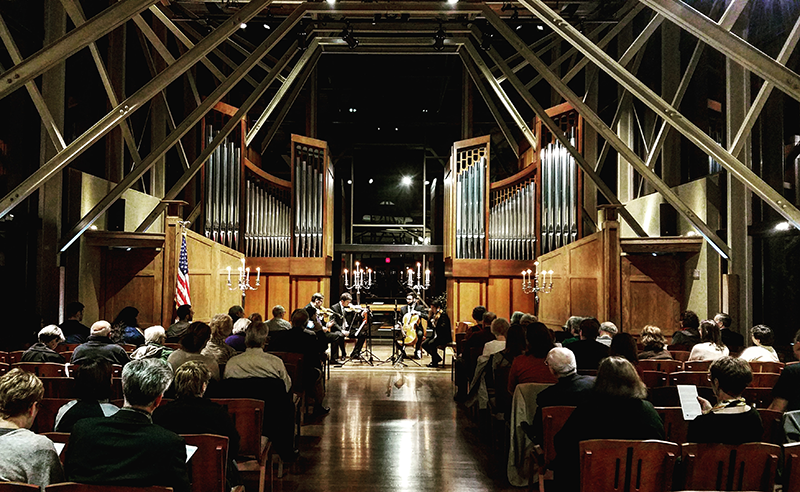 The first of the free concert series were held inside the theater of the museum. Due to the popularity of the concerts, they are now held in another building, the Harriet Wick Chapel, which seats 150, on the campus of the University of Pittsburgh at Bradford, located at 300 Campus Drive, Bradford, Pennsylvania.

The chapel is a perfect location for the concert series. Fashioned of wood and glass the view through the wall of glass is of lush forest. The woodland view is flanked by a pipe organ built by the Schantz Organ Company. The museum and the chapel are both designs of architect Albert Filoni of MacLachlin, Cornelius & Filoni Architects. This creative group of architects designed many award- winning projects located within the heart of Pittsburgh’s Cultural District: Heinz Hall for the Performing Arts and the renovation of the Benedum Center for the Performing Arts.

Filoni loved classical music and opera. As head architect, on both the Marilyn Horne Museum and the Harriet Wick Chapel. every detail speaks to his passion for architecture and music. The acoustics in both buildings are outstanding.

To keep current on the Candlelight Concert Series, sign up for the museum’s newsletter at: www.marilynhorne.org/concertseries.